Edge is a fantastic cityscape, focusing on a sharp- lonely house in a peculiar perspective, with a sharp edge menacingly pointing to the viewers. The strangeness of the structure is further emphasized by its faceless facade, its imperfect windows, and the surrounding plantation in unusual hues and shapes. This geometric cube and its tightly closed windows promise some zealously guarded secrets, and invites and dares the viewers to discover.

Crossing is a somber urban snapshot, featuring a not yet crowded thoroughfare, dominated by a row of pillars planting on a grassy tram lane in the middle of the street, between two vanishing tram tracks. From these mighty pillars, which extended from top to the bottom of the canvas, protruded a complex web of beams and wires crisscrossing the entire upper half of the canvas, as if wanting to imprison the indistinct highrises and the surrounding early morning gray sky in the backdrop.

In the foreground, a slouching pedestrian, isolated from everything and everyone, setting about to traverse one of the tracks. His detached form and uncertain posture enhanced the somnambulist atmosphere of this picture of parched and flinty urban life.

Domain was another painting completed during the height of the COVID pandemic, when my daily sphere shrank to my humble dwelling. Besieged by the sameness of familiar settings, I found some distractions from my bright kitchen, from the geometric patterns composed by a few household objects, to the contrast between the hard edges of those objects and the morphic shapes of their shadows, cast by the ever-changing, captivating lights. I recorded this solace with this painting, a study of familiarity, sameness, and subtle variations.

In the last couple of years, like many people, I was largely home-bound, and some reliable distractions and relief came through the courtesy of some windows facing the outside world, where some birds and squirrels rambled undisturbed by the upheavals in the human sphere.

When those carefree creatures failed to meet their appointments, I would ramble to a hallway window with a view to the house next door, whose bold and rich coat of deep blue, orange, and marron would jolt me into sharp alert. It was endlessly fascinating to notice how the colors shifted with the weather and to observe how those rich hues seeped into the hallway and tinted the plain off-white walls and ceiling colorful and alluring. Gradually, these shades moved and shimmered, like quivering butterfly wings, tantalizing and comforting yet somewhat overwhelming and alarming.

This sight formed the foundation of my metaphorical painting, Narrow Confinement, which recorded the narrow sliver of the comfort allowed me during the trying time and was much appreciated.

2020 was such a distressing year that we all hoped to close the page in earnest. Yet, when almost halfway into 2021, we are still fighting to escape from the dark shadow 2020 cast, constantly adjusting or expanding our traumatic memories, by generating sobering Postscript, which was the title of my new self-portrait, recording such an emotional journey of mine in that eventual year and beyond. 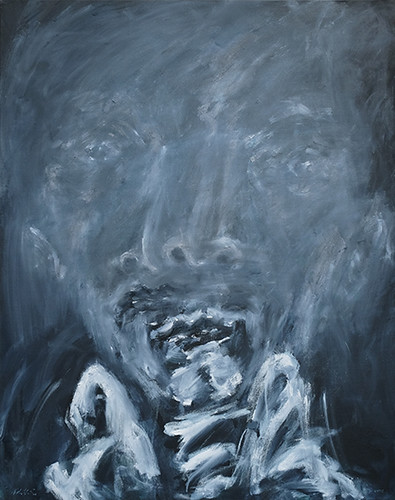 Though lately I am mostly attracted to shifting patterns, colors, tones, and shapes, from time to time, I am still inspired by pure scenery, particularly when I can discern such variations, and especially if the landscape evokes strong emotions such as moody melancholy. Such an image I had encountered in Manchurian China, barely a few months before the pandemic started to ravage the globe, intrigued and challenged me to create an oil painting when sheltered at home, Crisp, an understated work aptly captured a sense of community, isolation, and resilience. 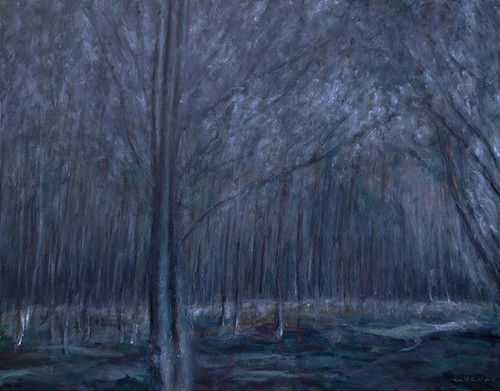 Waifs depicted an almost surreal landscape, tranquil and dark, as if under the spell of a mysterious and shushing moonlight. Amongst tall trunks, a group of figures shrouded in white, ostensibly young women, trod, plodded, or frolicked on the richly vegetated ground, ever deeper into the woods.

Despite their being in a group, there was an overwhelming sense of isolation and loneliness, and their internalized presence was touching to behold. Their billowing dresses were as mysterious as these figures themselves – were these innocent young girls or runaway women? Were they spirits, witches, or visiting phantoms from beyond the reach, and acted in tandem? 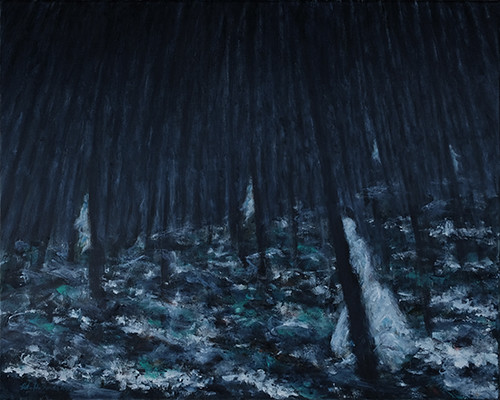 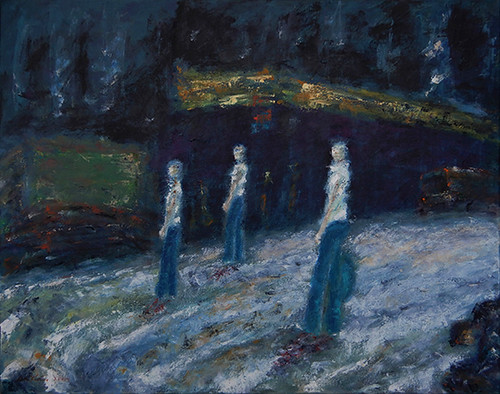 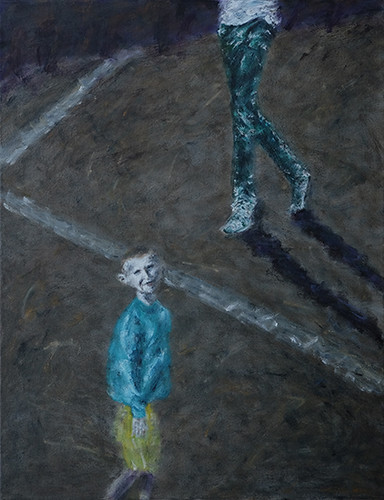