One of the greatest living artists Anselm Kiefer, is such an example who is steeped in tradition, and I was often moved by the historical resonances he brought forth to his monumental paintings, often through motifs connecting the past to the present, or the future. One of his striking paintings can be seen in SFMOMA, Unternehmen Seelöwe (Operation Sea Lion), placed a tin bathtub in a desolate field, containing several battleships. According to a curator, the manufacturer of those domestic bathtubs, was also a manufacturer of weapons used in WWII by the Nazi armies. Such deft reference was a master stroke of Kiefer’s. 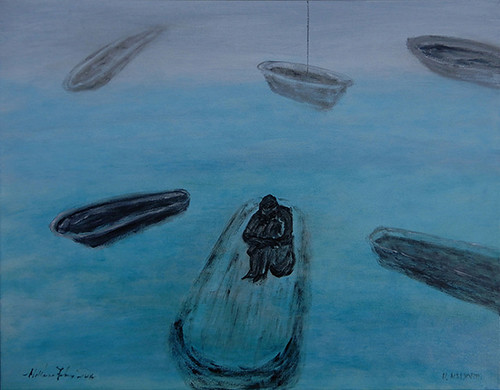 Inspired by the lush fall colors in the valleys, and rushing cascades in the mountains of Yosemite, which I recently visited, I made a gouache painting, titled Cascade, trying to capture the spirits and impression of the marvel, instead of literal shapes and shades.

A simple and heart-warming souvenir.