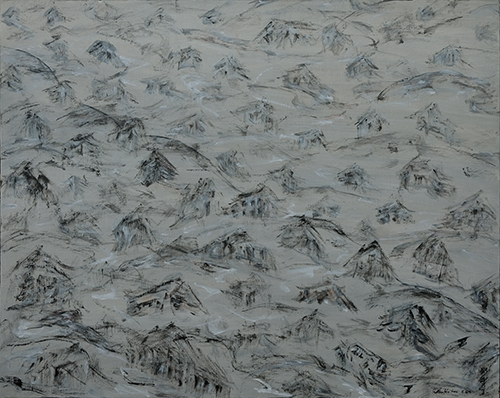 If I have to summarize my career as an artist, I would say that the biggest achievement I’ve attained was the creation of my portrait painting “Grandma”.

This painting, created during the time when George W. Bush was drumming up to invade Iraq, despite the series opposition from the people within and without the US.

At the time, I was reading Günter Grass’s fantastic novel The Tin Drum (Die Blechtrommel), and was struck by a passage depicting the a protagonist’s old peasant grandma, whose presence in the novel, though not frequent, but impressive, due to the wonderful depiction of the author of her at various phases of her long life – many layers of her skirts, her peeling potatoes, the heated bricks
she used to stay warm, again, underneath her layers of skirts.

I have painted several portraits of old women.  To me, they often can be categorized as sibyl, a word comes (via Latin) from the Greek word σίβυλλα sibylla, meaning prophetess. Old women are the personifications of mysterious wisdom and deep compassion, and the grandma in The Tin Drum was the personification of just that.

To generate a working-class and wise woman, I gave her a pair of large knotting hands and wrinkled face, and emphasized her stiff posture, against the equally thinly painted menacing sky, and somewhat comforting trees, whose monumentality again gave the grandma an air of a Greek goddess, all seeing, compassionate, and formidable.

This painting is part of my ongoing Apocalypse Series and was chosen by ArtSlant as a Showcase Winner.