Immediately after the devastating 2016 US presidential election, I was in the grip of a stark vision, when innocent and powerless people were rounded up by oppressive strongman regime, and that was the inception of my new project, “Our Winter of Discontent”, to capture the image of miserable, unhappy, discontent, and angry people, whose almost anonymous heads, shut behind a sprawling web of barbed wire, and oppressed by menacing dark clouds from above. This vision was not paranoid fiction; it was based on observation of Donald Trump’s increasingly divisive and hateful rhetorics leading to his ascension, which reaffirmed the ugly political and cultural reality of the almost apocalyptic US.

The world at large had been threatened by the rising totalitarian and nationalistic trends, and the diminishing of liberal democracy, and the situation only got worse by the day, under the weight of Donald Trump’s daily assault on democracy, free press, and rule of law, etc. My warning vision had become a sad prophecy, when many asylum seekers and their underage children were brutally separately, and summarily detailed. And thing could only get worse, and those behind the barbed wires could well extend beyond those “illegal migrants”.

A good vision doesn’t necessarily lead to good painting. After many months’ struggle, I put aside my first attempt, which became somewhat too belabored, and a bit unyielding, and started over with version two. Yet, though satisfying to a certain degree, it became a bit regimented, less spontaneous, and also a bit removed from my vision of a manic world of disorder.

Learned my lessons from those two attempts, I started a third version, and it largely achieved what I set out to document, with proper unsettling and fluid visual style matching our disturbing and depressing zeitgeist. 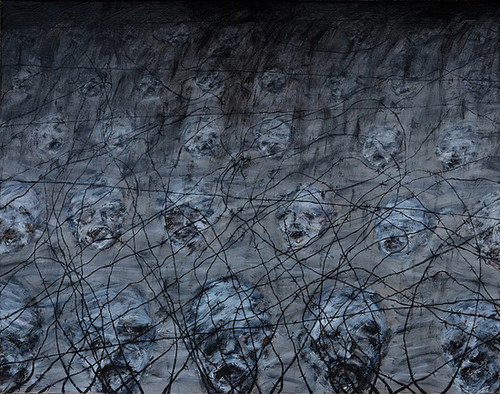