Recently I created an installation Wilting Flowers and fully documented the creation and installation processes.

This new effort was spurred by my continued fascination with paper material – delicate, malleable, and transitory, characteristics well suited for hinting at, versus representing, a world full of fragility and vulnerability, constantly under the threat of total destruction.

My local newspaper, “The San Francisco Chronicle”, served as the foundation: a segment of our time, distilled and encapsulated. Inky strokes and splashes were added to the newspaper sheets, which were folded and tied up to form large flowers, with aluminum wires wrapped with dyed twine as stems.

For the background, I chose five sheets of plain white paper, streaked with similar black strokes of ink diluted with various amount of water.

To install, I attached these background paper to a wall in an uneven row, then affixed those flowers, 13 total, to those sheets. There were no strict rules about how to lay out the background sheets and flowers, as long as the finished installation looked balanced, and the flowers largely faced outwards.

I have installed these sheets and flowers on different surfaces – a colorful graffitied plywood wall, or somber looking wooden fences, at different times of the day. The differences between the surfaces, the different light cast on the wall or fence, background sheets and paper flowers, all contributed to a murmuring polyphony. 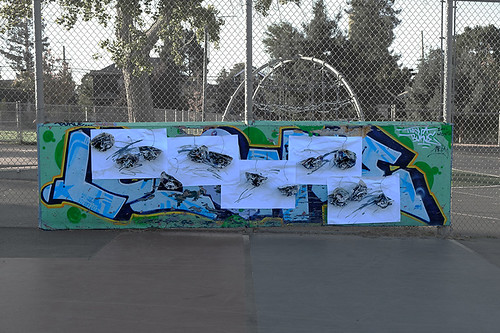 My Mirage, a fantastic painting, was based on a vision visited me when I was falling asleep but with enough mental presence to get up to make quick notes – a distant town, whose outlines barely discernible, in the manner of those commonly seen in old Dutch or Flemish landscape paintings, overwhelmed by several enormous and boldly sketched black feathers floating above the sky. Behind those dark and somewhat ominous feathers, a delicately pretty pale blue sky flashed through persistently. Yet, despite the seemingly menace, those dark feathers also looked rather protective and comforting. A world of ambiguity. 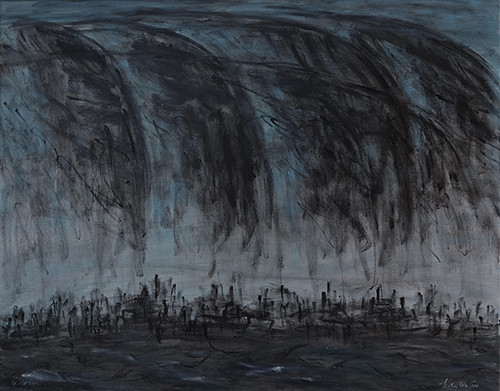